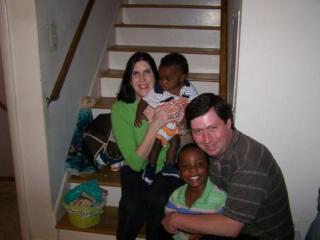 I always wanted to be a mom. My earliest memories were of naming my future children (they were Sandy and Johnny. Yea, I had seen “Grease” too many times). I spent years, I hate to say it, but, yes, judging how other mothers did it and thinking how much better I would. I didn’t mean my thoughts, mailiciously, but I did take mental notes of what not to do. It’s always easier to see other mistakes and I was watching. As I tried not to resent them for being able to have children, when I couldn’t, I watched them, so I could do it better one day.

Then, I became a mom and I was ready! It was then that I realized that I didn’t know a damn thing. It’s amazing how you forget everything you think you know, when it’s rally time. As time went by, I found myself making the mistakes that I vowed not to make and finally understood. But, flawed, confused, and tired; it was time to make a go of it. And, I went.

The first night that the boys spent with us was long. William was a bundle of energy and, understandably, over-stimulated. Early in the evening, after dinner at Burger King, he asked to watch “Monsters Inc.” We set it up. He watched for about 10 minutes and moved on. About 20 minutes later, he asked us to rewind it so he could watch it again. Anxious to make him happy, we did. He watched about ten minutes and moved on. About 20 minutes later, well, you get the point..

Antwan was pretty easy-going. He was only 13 months, adorable, and was content just to hang out and play with the toys. What I remember most about the first night with Antwan is that I convinced myself he was sick because he felt a little warm. This is when I realized that I didn’t have a thermometer. I would later understand that Antwan is hot-natured and sweats very easily. But, that first night, I was sure something was terribly wrong based on my budding mothers’ intuition, slightly high body temperature, and the fact that he was tired (after a long day).

Regardless, we survived the night.

I don’t remember sleeping that night, but I must’ve because the alarm woke me up.

I set it for 5am (I did this for 2 or 3 days). I got up and cleaned. I swept and mopped the whole house and did all the dishes. My main reasoning was that we had a 20 year old cat that had bladder control issues. So, I wanted to make sure that the floor was clean before Antwan was crawling all over it. I was only able to keep up this pace for a few days because I was beyond tired. Taking care of 2 kids, all of a sudden, and getting up super early introduced me to a level of fatigue that all my years of staying out all night and dancing had not prepared me for. I was tired. And, I wouldn’t be that tired again until Lizzie entered the picture, some months later.

As ironic, sad, luck would have it, my cat passed away right around the time that I realized that I couldn’t keep getting up so early. I was helping William feed our animals; we had many. As he was feeding the turtles, I looked over and saw that Judy was dead. I wanted to fall apart, but I didn’t want William to see her, so I said nothing (my first practice at being a real mom, I suppose). Instead I aimed him towards the turtles and ran back to get Brian who came and moved her. Later, when I had time, I cried, a lot. Brian remains convinced that Judy stuck around long enough to make sure I got a family like I had always wanted and then she just let go. The animal lovers might agree. The others might think he’s a little crazy for saying it. But, I believe it’s possible and it does comfort me.

Anyway, it was very symbolic. Seasons change, doors close and open, etc. Judy was gone and I was heart-broken. And, at the same time, I had two (soon-to-be) sons and my heart was complete, finally.

So, as I started to get a little more sleep and, sadly, a messier house, I started to think maybe I could do this. 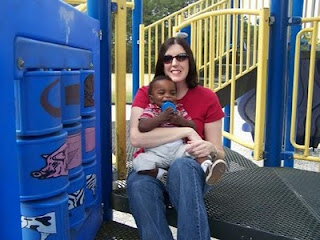 The transition was natural for Antwan. He was a baby and, although, I’m sure he had memory of his foster parents, he settled in and had no trouble seeing us as the primary caregivers. I would call myself “mommy” when I talked to him because it made sense.

But, for William, we had been introduced as “Miss Emily” and “Mr. Brian” and we weren’t really sure when or how to make the switch. It’s hard to know how much a 5 year old understands about a situation that’s so hard for an adult to understand. We said he was going to come live with us, he said that was fine, and away we went with our new daily life.

The transition to mom and dad turned out to be no big deal; but, of course, a very big deal.

On one of the first days, a friend came over with some toys and clothes for the boys. She walked in and burst into tears. She introduced herself and said to William – “They are going to be your new mommy and daddy! Isn’t that wonderful?” William, casually, agreed. And, I silently, panicked. I didn’t want him to freak out, didn’t want to push him, didn’t want to do anything we shouldn’t do. I barely knew what we should do; so what we shouldn’t do, was even harder to figure out.

I honestly can’t remember if I said anything to him about it when she left. It’s kind of a blur. But, I do know this. Within a few days, we were mom and dad.

For Brian, it was at a Chick-Fil-A. He was in the play area with the boys and William mentioned that my friend told him that we’d be mom and dad. Brian agreed and asked him if that was ok. William said yes. He told him that he could call him dad when he was ready. He tentatively tried it out, a few minutes later.

For me, it was while playing outside at the water table, maybe the next day. In the same way, William casually brought it up. Taking a cue from Brian, I told him that he could call me mom when he was ready. He paused and, without looking at me, he said, “I’m ready now.”

It was by far one of the most beautiful moments of my life. And, my eyes are welling up now, just trying to type it. From that moment, I was mom and there was no more Ms. Emily. I was happy to see her go. I had waited a long time to hear someone call me mom and I thought it was awesome.

We were lucky. William didn’t have trouble bonding, like many foster kids do. He was ready and desperate to be loved. He never held back. He had his share of issues, still does, but willingness to bond is not one of them.

It does take a little more work to form the permannt bond with a new child who is not a baby. When you adopt an older child, you adopt his past. Even though, William was only 5, he had experienced 5 years of instability. He was removed from his biological home at 2, put in foster care, and then sent to live with us. He didn’t remember much about the biological mother, except that she didn’t feed him (his words).

As much as I hate to admit it, I couldn’t help but, feel, in competition with his former foster parents. They had fostered him for 2.5 years, but didn’t want to adopt. It was totally understandable that he would talk about them. It was selfish of me to expect him to forget. But, even so, it bothered me. There was this whole part of his life that I couldn’t touch and I wasn’t there for. It messes with your mind. We both always let him talk about his foster parents, though, and respected the fact that they were part of most of his young life. Even though, I had a hard time understanding them; we both told him that they were happy that he had a forever family. 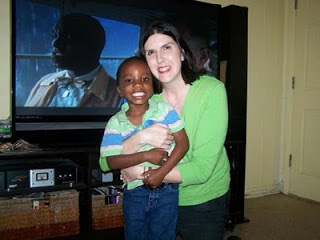 Anyway, as time went by, it worked itself out, he mentioned them less and less. And, he saw us more and more as his reality. Today, William is my son and I wouldn’t trade him for anything in the whole world. It’s harder adopting an older child (but so worth it). Even though, he was only five, he still was seen as too old to many potential adopters. If I could have a random baby or William at 5, with all his quirks, I’d take William every time. I always say that I wish that I could’ve had William as a baby. Not because he was too old, just so, I could’ve protected him from the pain and spared him his issues. But, that’s not how it worked. The important thing is that I got William and I am so grateful for that.
Click here to watch the video that we made to celebrate our 3 year anniversary! ( :

12 thoughts on “Adopting William and Antwan”