Skip to content
Years ago, I was talking to an adoptive mom about her son and she said that she was going to wait until the “right time” to tell her son that he was adopted.  I flash backed to the “Family Ties” episode when Skippy found out that he had been adopted and his whole world fell apart. And, I wondered if my friend was making the right decision to not let her son go ahead and grow up knowing.  But, of course, either way, it was her decision.
So, years later, there we were.  We were adoptive parents, too.  Whether to tell our kids was a pretty easy and obvious decision for us, of course.  William was five years old, so I’m thinking that he knew already.  And if we didn’t tell Lizzie and Antwan, I’m pretty sure they would’ve figured it out on their own.  🙂
When we adopted our dog, Rose, from the Humane Society, I corrected the kids when they said we were buying a dog.  I did this, partly, because, I’ve never bought a dog or cat in my life.  All my pets have been rescues.  But, I also did it because I thought it was a cool way to demonstrate another form of adoption.  Once she was officially ours, I made a point of talking about how she’s a member of the family now, too.  And, even though, it might take her time to settle in, we needed to be patient with her because she was one of us now.
Anyway, the kids get that Rose was adopted, but I guess maybe I haven’t talked to Lizzie about the fact that she was adopted as much as I thought.  Because, yesterday morning, she was talking about Rose and how she was adopted and I said “You know, you were adopted, too.”   Well, Lizzie is so used to me teasing her that she assumed it was a joke.  She giggled and said “No, I’m not!”
When I told her that I wasn’t being silly and that she really was adopted, she just looked at me.  I then launched into an impromptu explanation.  I told her that some people came to us and said that she needed a Mommy and Daddy and asked if we wanted it to be us.   We were so excited and said yes! It was much more light-hearted and less detailed than the real story.  But, my four year old doesn’t need an education on the foster care system.  She only needs to know that she is special and that she and her brothers are our world.
Then Brian came in the room and I told him what we were talking about.  So, he joined in, borrowing an anecdote that Harpo Marx had used on his own children.  He changed the names, of course. 🙂  He told her “We went looking for Lizzie.  We didn’t know where she was.  And, when we saw you, we said that’s Lizzie!”
He has used this with the boys, too. 🙂
I don’t know what Lizzie understood, but I’m pretty sure that she felt wanted.
So, feeling like I had taken advantage of an opportunity, I then took my girl to school and apologized to the teachers for bringing her late.  Sadly, I have to apologize for being late a lot. 🙂
One day, when the “where do babies come from” question comes, it’s probably going to have a bit of a different spin to it.  The miracle of creating life isn’t as relevant to me as the miracle of watching a life.  For me, it’s not so much a question of where do the babies come from, but how did my babies get to me. 🙂 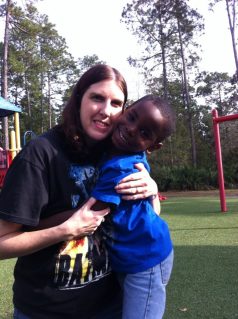 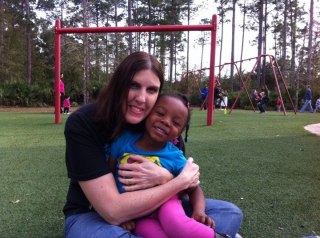 25 thoughts on “Telling Your Kids That They’re Adopted”