Skip to content
Me and Kaleb. Kaleb and Me.  We’re like two peas in a dysfunctional, moody pod. For the most part, I realize that is actually totally normal. But, sometimes, it would be nice to get through a day without drama.

It’s not all cranky teenager drama, of course.  Sometimes, it’s moody mommy drama.  And, I’m sure that when it’s on my end, I seem as crazy to him as he seems to me.

And, of course, there are times that he has totally gotten his way, but they don’t seem to stand out in his memory as much as the times that he doesn’t. 😉

Over the last few months, Antwan has come home sick twice when he probably didn’t need to (judging by his dramatic recovery as soon as we got in the van) and Lizzie stayed home sick once.  She also wasn’t sick.  But, when she wasn’t feeling well the night before and claimed to still feel sick in the morning; I decided to stay on the safe side.  That choice cost me a day’s pay.  But, it did gain me a day of quality time with my daughter and a brief nap on the couch when she dozed off.

Kaleb complains about this whenever the topic comes up.  I have acknowledged that I made the wrong choice when I kept Lizzie home.  I have explained that when the school said Antwan was sick, I didn’t have much choice.  You don’t tell the elementary school nurse that you’re just going to leave him there when he’s complaining about an upset stomach and a sore throat.

When Antwan came home sick, the other day, Kaleb asked what was going to happen if his throat still hurt in the morning.  I thought to myself, “You’ll go to school. You have exams.”  Obviously, if he was sick-sick, he’d stay home.  But, a sore throat that didn’t stop him from playing basketball, yelling at the xbox, or singing; probably isn’t the kind that should keep him home.

He ended the night with a rant about about how he always get the short end of things.

When he came home, the next day, he brought it up again. He was partially apologizing for getting mad and partially taking the opportunity to make his case again.  My boy’s a multi-tasker! 😉

And, because I had been thinking about it, I said what I had been pondering, earlier.  “I want you to know that if I had you when you were in elementary school; and I wish to God that I had, I would’ve been picking you up when you weren’t really sick, too.”

He didn’t say anything.  He just came over and hugged me.  Then I said, a couple more times that I wish that he had been mine all along. Then I held back the tears.

Then, of course, I decided to blog about it. 😉

As, he went back to the xbox and I tried to compose myself, I threw one more in for good measure.

“And, don’t forget that I signed you out early, last week, when we had your high school schedule meeting!”

I don’t remember if he said anything to that, but he heard it.  And, I wanted him to remember that he doesn’t always get “screwed” (as he said).

And, I really hope that he remembers this.  I love him.

I don’t treat him like a little kid because he’s not.  But, I also need to remember that sometimes that’s exactly what he wants.

Starting with a teenager was and is hard.  It’s hard for me.  It’s hard for him.  It would have been so much easier if he was younger when we got him.  Yes, that is why people are afraid to adopt older kids.  It’s true, it is harder.  But, I wouldn’t change it.  Since getting Kaleb at a young age wasn’t an option; this is what we are left with; a teenager with issues being parented by an emotional, sensitive mom and a pretty awesome dad.

He will drive me crazy.  I will drive him crazy.  Those are both guaranteed outcomes.

Wanna know another guaranteed outcome?  I will love him forever.  And, I will be as sure then as I am now that it is all worth it.  I can only hope that he will feel the same way. 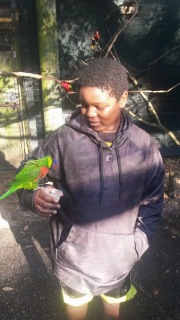 14 thoughts on “Teenagers And Moms And Their Drama”