Skip to content
Tomorrow is Easter.  And, when you are an adult, that brings many stresses.  For me, I’ve been stressing about buying all the Easter goodies when we’re tight on cash, worrying that everything will go smoothly, and, of course, the biggest stressor of all…how should I match us? 😉  I’m a little sad this year.  I didn’t get us to the mall for Easter Bunny pictures, I didn’t get us to any Easter egg hunts around town, and I didn’t buy matching outfits like I had planned.

But, that’s gloomy of me, of course.  And, it’s definitely not the point of this holiday.  There’s the obvious religious aspect, of course.  And, there’s another important aspect – family.  We are together.  Brian has the day off.  The Easter Bunny will come to our house while the kids sleep and the Grandma bunny will probably have eggs waiting for the kids when we go to my sisters.  The kids think that Grandma bunny is pretty cool since she usually puts money in her eggs. 😉 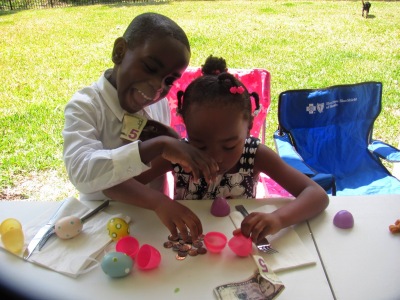 A lot has happened in the past year.  For example, there’s that thing about us adding a teenager to the mix.  Kaleb was visiting, last Easter, but he wasn’t ours.  It was around the time that he had made it clear that he wanted to be adopted.  We were open to it, but hadn’t officially committed.  I remember analyzing everything that he did.  He probably felt like he was auditioning.  I remember that he was on his best behavior.  He smiled for Easter bunny pictures, 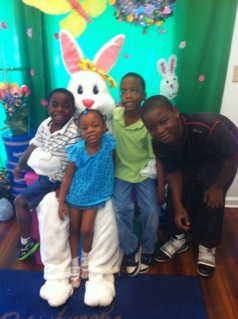 let me coordinate his Easter outfit, and cheerfully, went along with everything. 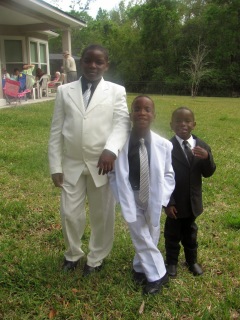 I’m trying to remember how I was feeling.  I’ll probably have to go back and read my own posts to find out. 🙂  But, I know that I knew that things were going to change.  One way or another, he was in our lives. 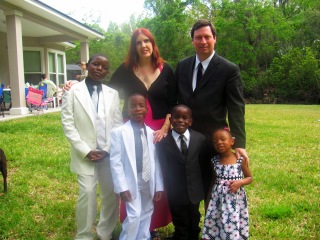 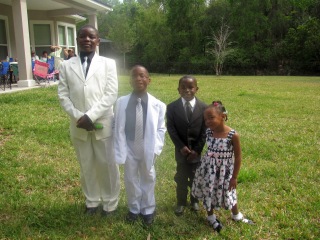 It was not long after that when we did 100% commit and he was scheduled to come to us at the end of June.

And, I was scared.  Really, really scared.  But, I was in and that was that.  There was no question that it was the right thing to do.  Not to mention that I already loved him.

Learning to be a mom to a teenager was hard for me.  Of course, “was” is a strong word because I am still learning in a lot of ways.  Ok, maybe in all of the ways. 🙂

I’ve argued a lot more with Brian than I used to.  Partly because Kaleb reminds me of Brian so I was extra sensitive to many things.  (Yeah, I know that’s not fair.)

And, I’ve gone to bed, wondering what we were thinking.  And, then felt terribly guilty for having that thought.

But, I’ve also sat with him as he signed up for high school classes.  I’ve watched him show intense love and compassion towards his little brothers and sister.  I’ve watched him bop to music (do the cool kids say bop?) when he didn’t know that I was watching.  I’ve taken a million pictures of various random moments.  I’ve tried vainly to beat him in an xbox basketball game.  I’ve sang cheesy duets in the van.  I’ve given countless high fives and hugs.  I’ve loved him.

Along the way, he learns. I learn.  He teaches me.  I teach him.  Quite frankly, if when he grows up, I can proudly say that I taught him to close a cabinet or put a glass away; I’ll call my life a success! haha

Last weekend, I was mad at him.  Just plain mad.  We had discovered that he wasn’t doing his homework and he was bombing his tests.  His grades were dismal.  And, as we discussed it with him and made him do some homework; he managed to justify giving us attitude.  Brian tried to defuse the situation as I worked against him.  Not deliberately, of course.  But, you see, I just can’t resist responding when Kaleb says something that I don’t agree with.  Brian has told me, repeatedly, that “being right doesn’t help.”  And, man, is he right because giving Kaleb my opinion of things solves nothing.  It only makes him want to argue more.

Anyway, he eventually went to bed with plans to attend a birthday, slumber party on the following night.  To be honest, he probably didn’t deserve to go.  But, I really, really needed the break.  Plus, it was the first birthday party (with us) that he was going to and it was important,

So, when the birthday boy got grounded and it all fell apart, the next day, I was bummed, to say the least.  I needed that break.  It’s so not fair.  These thoughts and others floated through my head.  I spent a few minutes, alone in my room, allowing my frustration.  Then I went back to “work.’

The next morning, we went to my parents’ anniversary breakfast.  I’m not proud of it, but I wasn’t saying much to him.  I’m not suggesting that I was giving full on silent treatment, I just wasn’t going out of my way to talk.

We got ready to sit down.  Since he usually sits next to me, I took advantage of the opportunity to give one of the others a turn.  As everyone discussed where they were sitting and made everything super complicated, I heard Kaleb say something about sitting next to me.

After all of the arguing, he wanted to sit next to me??   It was at that moment that I remembered what my place is now.  I’m the mom.  I don’t have the luxury of being the ticked off Emily.  I have to be the mom.  And, sometimes, that’s hard.  But, here we are.  And, there is no question that it’s where I want to be.

When we got home, he went out to play.  He was in and out all afternoon.  At one point, he came in.  He kind of loitered in the kitchen.  He told me what he had been doing at his friend’s house.  He said he wanted to go back.  I said ok.  But, he stood there still, making random conversation.

Then, he, casually, said “I don’t know why I’m still here” and started to head out.

He did and I hugged him because I was pretty sure that was why he was still there.  I told him that I loved him and he said he loved me, too.

I am constantly amazed at my ability to screw up, but, occasionally I get it right.  He needed that hug and so did I.

So, this year, I’m going to try not to worry about whether I bought them enough candy that they won’t finish or if they’ll notice that I forgot the stuffed bunnies.  I’m not going to expect the perfect day and get upset if it’s not.

It’s going to be the perfect day. 🙂

13 thoughts on “It’s Easter Again And It’s Been A Busy Year.”