Skip to content
When you adopt transracially, the concern about whether you can adequately expose your children to their black culture and educate them on what it’s like to be black in America is a valid one.  I have read that many families have chosen to move to more “black” areas, thus making themselves the minority, instead of their kids.  I think that’s great.  But, we have chosen to stay in our ridiculously white area because it has the best schools in the city, maybe the state, I’d have to fact-check that. 😉  Since our boys were starting out behind academically, it was great to have such good teachers ready for them.  And, as the years passed, more and more people of color have moved to the area.  So, it has gotten a little better.  And, meanwhile, they have a dad who knows everything about everything. (I am not exaggerating.  The man is a walking encyclopedia!)  So, he is well equipped to teach them about their history.

But, still I worry.  I worry that they feel different.  I worry that they won’t fully connect to either the white or the black culture; always feeling slightly different.  I look for ways to connect with more black people so my kids won’t feel isolated.  But, it’s not like you can post a craigslist ad…seeking black friends.   Well, you can, there’s some crazy stuff on craigslist.  But, it doesn’t seem like the way to go.

Then something happened.  We met the Jedis.

Most of you know that we’re kind of nerdy.  We love sci-fi/fantasy/superheroes.  I would run away with Batman in an instance, if only he existed.  If only…. 😉  Anyway, Brian’s bookstore was doing pop-culture events, last summer.  This gave him a lot of chances to wear costumes to work. 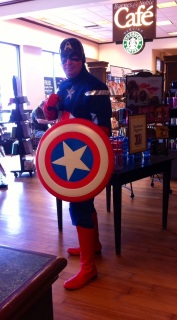 During the Marvel event, Brian connected with someone who had a Jedi group and he agreed to bring his group to the event.  They perform at conventions, do charity work, and, of course,  come to book stores.  So, The Jedi Academy of North Florida came.  They did a saber training session for the kids and posed for pictures.  It was pretty…no, scratch that, it was very cool.

Anyway, after the event, Master Will explained that he was trying to build the academy and asked if he could train William and Antwan as his Padawans.  Um…yes!  This quickly evolved into the five of us joining the academy, followed by Kaleb (once he realized that he was, in fact, not too cool to be a part of it, haha).

The reason that this is relevant is that the Jedi Academy of North Florida is primarily black.  So, without even trying, we had achieved two of our life’s goals (that may be overstating it, slightly)!  We had connected with more black people AND more nerdy people!

And, I can’t say enough about these wonderfully nerdy, black people (and that’s the last time that I will describe them that way).   Master Will is a super nice guy and his children (young adult son and teenage daughter) are basically how I hope that my children turn out.  Everyone in the group is just wonderful.

So, we have been spending a good portion of our time practicing Jedi moves.  And, basically learning the ways of the force which is all about patience and control and harmony.  Good stuff.  And, after a lot of practice, the boys performed at a couple of conventions.  With more to come. 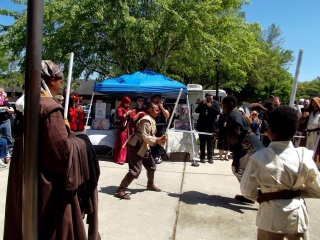 I have even been dubbed a master.  I spent a week practicing “taking a knee” because I was terrified that I wouldn’t be able to get back up if I got down.  Ah, middle age. haha.

I’m so happy that we got involved with them.  I especially love that it’s the whole family.

Brian and I have talked about the fact that we are the minority in the group.  (Although, as the group grows, it will blend more and more.)  We think it’s awesome.  Well, more to the point, we don’t think anything of it.  We’re just glad that our kids don’t feel like the minority.  Maybe we worry about it too much, but if you make the mistake of reading too many transracial adoption group posts or talking about it too much, you can start to feel like you are not worrying enough.  Either way, we have inadvertently found an awesome solution to two of our problems.  Because being nerdy can make you feel pretty alone, too.

I asked him what he meant.

I explained that I didn’t mean, instead of me.  But, meanwhile, my heart was so happy.  With a simple statement, he epitomized it.

Color matters, it just does.  But, you know what matters more?

You don’t need a craigslist ad to find that in our family.  There is plenty to go around already. 🙂 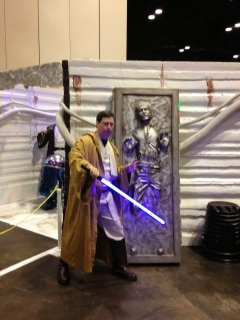 24 thoughts on “Exposing My Kids To Their Culture.”